For Jack Chaplin, food has always been a way to bring people together. Since opening his first restaurant in 1992, he’s poured his heart into making comforting Italian classics. As the owner and founder of Daddy Jack’s in New London, Connecticut, he’s created a beloved community dining spot known for its oven-baked pizza and hearty pastas.

While Jack loves to cook, he also finds great joy in lending his expertise to others. In 2008, Jack started a YouTube channel in hopes of sharing his knowledge of cooking with those outside his immediate sphere. Filming without fancy lighting or equipment, Jack has since racked up over 100,000 subscribers around the world who are drawn to his down-to-earth nature and tried-and-true tips.

Throughout the years, YouTube has empowered Jack to connect with home cooks and fellow restaurateurs alike who are eager to pick up some insights and perhaps even try their own hand at making some of his mouth-watering cuisine. When COVID-19 hit, YouTube enabled Jack to connect with fellow foodies while his restaurant was temporarily closed. In order to follow shelter-in-place instructions, Jack pivoted to filming tutorials in his home kitchen rather than at the restaurant. To his delight, people followed his lead and started sending in videos of themselves making recipes at home, which Jack shared with his YouTube following. 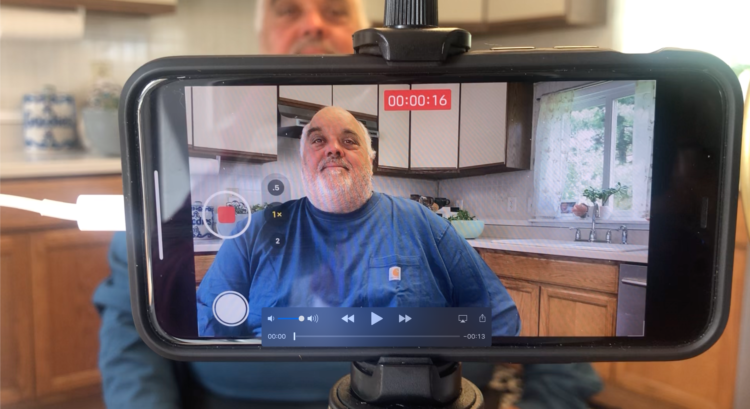 When YouTube asked Xpedition to create a video series about small businesses who came up with creative solutions to pivot during the pandemic, our research team came across a story about how Daddy Jack’s was connecting virtually with his patrons and donating meals to community members in need. We were immediately drawn to his friendly demeanor and easy-to-follow YouTube videos. We saw Daddy Jack’s as a great example of how resourceful people can be in times of challenge, and we knew that sharing his story had the potential to inspire others.

Typically, our team would pack up our filming equipment and hit the road to spend time with the Daddy Jack’s team in person. We would have conducted interviews and captured footage on site to create a short film. But during the pandemic, we completely pivoted our logistical approach to storytelling.

We hopped on a video call with Jack to determine the best location in his home for filming an interview. Through a computer screen, it almost felt like we were there, directing on location. After advising on camera settings, seating positioning for the interview, and lighting, Jack and his wife LaKisha joked about how many tips they were learning for shooting their own footage!

A couple of days later, we interviewed Jack via both Google Meet and a cell phone. The producer/director asked questions from the laptop, while the phone recorded high-quality footage that would be used in the final video. We were thrilled to see and incorporate Jack’s “throwback” photos from his early days as an emerging chef and restaurateur.

Just as Daddy Jack’s had to make changes to the way they operate during quarantine, so did our film production team. Though restrictions related to the virus meant we could not travel or film in person, we and our clients stayed dedicated to a shared mission of telling stories about inspiring people.

Our editing team then used the footage from these remote interviews to piece together a cohesive and compelling story about how YouTube had empowered Jack to pivot during the pandemic. The video was shared on the Google Small Business YouTube channel as well as on its social channels. Recent research indicates that one-third of U.S. restaurants could close down permanently during the pandemic, but Daddy Jack’s story provides a blueprint for restaurant owners who are looking for ways to survive this difficult time.

While we initially aimed to share the stories of those who pivoted creatively in small business, we found ourselves doing the same. Much like Jack, we had to find a new recipe for business success during an uncertain new normal. But we know we’ve become a stronger, more flexible team because of it.

By honing our team’s remote video production skills during the early days of the pandemic, we created a template that can be used for future projects, both during COVID-19 and beyond. Being able to create emotionally driven, high-quality videos remotely will enable our team to tell even more diverse stories from around the globe, even when we can’t be physically present.

We’re incredibly proud of the Daddy Jack’s video, which was released in recognition of International Small Business Week. You can check out his story below, and you can learn more about how Xpedition has supported small businesses during the pandemic here.