Growing up in a small town in Colorado, Easton LaChappelle loved tinkering—whether that meant taking apart old appliances, enhancing electric scooters, or motorizing traditional bikes. While his parents didn’t always understand his passion, they always supported him. (When Easton started conducting high-voltage experiments, his father left a fire extinguisher in his room in a silent show of support.) Thanks to the knowledge he gleaned from YouTube, Easton launched a game-changing prosthetics company while still in high school.

When YouTube asked Xpedition to produce a series of videos about small business owners who had learned important skills through watching videos on their platform, our skilled team of journalists, researchers, and producers immediately got to work. We worked together to find stories that best fit the needs of this campaign and conducted preliminary interviews to determine which individuals could speak most organically and authentically to the value they gained from using YouTube.

When we discovered Easton’s story, we were intrigued by his desire to make an impact on people in such an innovative way, and at such a young age. After connecting with Easton over the phone, our producers knew instantly that his passion, personality, and unique product made him an ideal story lead for the campaign.

When he was 14, Easton spent about nine months designing a robotic hand that could be managed wirelessly using a control glove. While the first version—which was made of electrical tubing, fishing line, LEGOS, and small servomotors from RC airplanes—barely functioned, it was proof that the concept could work. After seeing his raw idea turned into reality, Easton started brainstorming ways to improve it and realized he could make the device more human-like if he added an opposable thumb.

While displaying a robotic arm at the Colorado State Science Fair in 2013, Easton met a seven-year-old girl who was wearing a prosthetic device. Her parents told Easton that the rudimentary prosthetic arm cost around $80,000. Given how much technology had advanced, Easton felt it was unacceptable that people still had to spend so much money on such archaic devices. On the eight-hour drive home, he realized for the first time that there could be a deep human impact behind the technology he created.

Determined to create more affordable and accessible prosthetics, Easton turned to YouTube. Month after month, he watched videos that helped him learn the core fundamentals of how electronics and microcontrollers work, how software interfaces to electronics, and how sensors function. Watching visual tutorials gave Easton the building blocks he needed to perfect his prototype. As his small bedroom morphed more and more into a lab with each passing day, Easton spent time talking with fellow innovators on YouTube to learn how they had solved complex problems when designing their own prosthetics. Easton even created his own YouTube channel to document his progress, and the videos about new iterations of his robotic hands racked up half a million views. 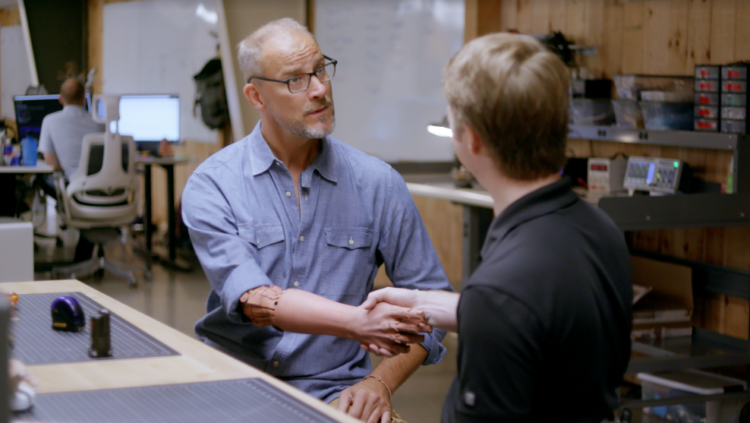 Once YouTube gave us the green light to move forward with the film, our crew traveled to New York in August 2019 to meet Easton and his team.

While filming at Unlimited Tomorrow, we got to see the various stages of prosthetics Easton has built, as well as how they’ve been reimagined over the years. We also learned more about how the company’s 3D printing process works and about their plan for ramping up the scale of production. Because Unlimited Tomorrow has a lot of technology still in development, we coordinated carefully with Easton’s team to show as much of his world as possible while protecting not-yet-released designs. We also met an amputee named Chad who demonstrated the use of a prosthetic and shared how the device helps him with everyday tasks.

At Easton’s home, we filmed scenes that recreated the feel of his experience learning to build robotics in his bedroom with YouTube tutorials by his side. 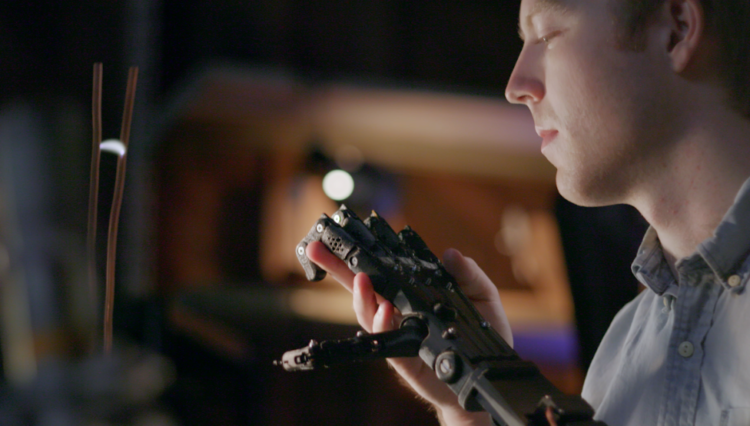 After returning to LA, our post production team cut the footage into a short documentary-style film showcasing how YouTube served as a springboard for this promising young inventor.

The video was shared on YouTube’s official channel, blog, and Instagram as part of the new United States of YouTube campaign. Check out the film below and read more about Easton’s story on theYouTube blog!