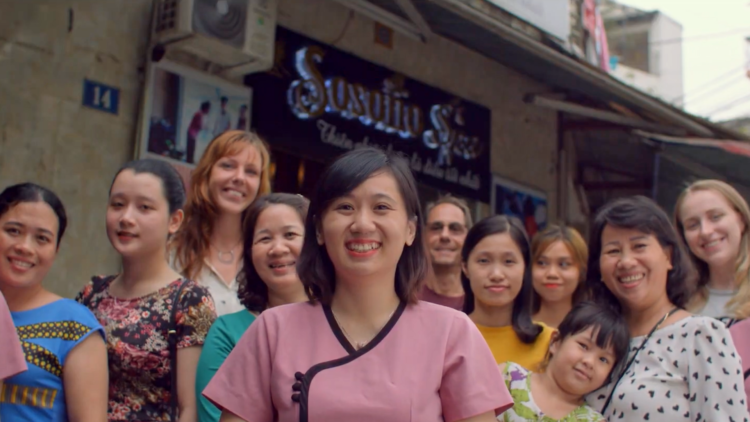 When Brazilian entrepreneur Bia Santos started scheduling client meetings for her financial education startup Barkus, people often mistook her for an intern rather than the CEO. “In the beginning…my [male business] partner was the one that presented things because we knew that he would be listened [to] and sometimes I wouldn’t,” Bia recalls. “I couldn’t see myself represented in the financial field, so I really wanted to create opportunities, not only for myself, but for other girls that wanted to work there.” Machi Takahashi, the President and CEO of Japanese-based technology platform Stroly, echoes that sentiment. “I was scared if I quit or if I gave up at that moment, then women would disappear from the field,” she says.

As Xpedition’s video team interviewed female small business owners for Google’s 2022 International Women’s Day video, we heard many similar stories. In recent years, the world has made significant progress toward universal primary education, but there is still much work to be done to ensure true equity in the workplace. According to the United Nations, only 47% of women of working age were in the labor market in 2020, compared with 74% of men—a gap that has remained fairly consistent since 1995. Globally, only 18% of enterprises surveyed had a female CEO in 2020, and only 7.4% of Fortune 500 companies had a female CEO.

On this International Women’s Day, as we celebrate the social, economic, cultural, and political achievements of women worldwide, we also want to contemplate how our work can lead to greater equality. As a creative agency, we know that the stories we tell (and the way we tell them) is incredibly important. That’s why we’re committed to promoting equality through the way we represent gender in our campaign and content. Here are three ways other marketers can create more accurate and thoughtful campaigns.

According to recent research, only 29% of U.S.-based women believe they are represented accurately in advertising (and only 6% believe they are represented very accurately). Women in advertisements are often defined by their sexual desirability or relationships, while men are often characterized by their strength and social status. This not only reinforces outdated gender stereotypes about women and men; it also ignores the one million+ people in America who identify as non-binary.

When 500 U.S.-based women ages 17 to 73 were asked how they would like to be portrayed in advertising, most said that they wanted to see ads that are less sexualized and more representative of women of different shapes, sizes, and ethnicities. Many also reported they would like to see women in roles that have traditionally been viewed for men, such as C-suite executives and construction workers. From making a film about a female farmer to producing a video about a transgender small business owner, Xpedition aims to create content that helps people of all genders and backgrounds feel celebrated and represented.

Advertisers have a unique opportunity to create content that avoids outdated and false stereotypes and instead represents peoples’ real-world experiences and perspectives. This might mean creating ads that focus on someone's innovation and drive rather than their physical characteristics or producing videos where women and non-binary people are the main characters, not the side characters. It might also mean highlighting a male lead’s vulnerability and emotions rather than his tough-guy facade. By focusing on real human experiences instead of stereotypical roles, advertisers can help give their audiences permission to truly embrace their gender expression, in all its nuances.

The world is not binary—and for campaign messaging to be effectively received (and perceived) by consumers, it’s important for advertisers to acknowledge that. Thirty-five percent of Gen Zers say they know someone who uses gender-neutral pronouns and want online forms to include options besides “man” or “woman.” Advertisers can commit to taking small steps that make a big impact. For example, Birchbox’s website has categories for “beauty” and “grooming” instead of “women” and “men.” Other brands such as Mattel and Levi’s are also promoting inclusivity by creating gender-inclusive or genderless products.

Indeed’s recent Pride ad is a great example of how advertisements can spark important conversations and provide much-needed representation for trans and non-binary people. When producing advertising campaigns, it’s important to expand the narrative by resisting outdated binary tropes. Whether through thoughtful hiring of actors for a photo shoot or strategic partnerships with diverse influencers, there are many ways to practice inclusive marketing and ensure that audiences see themselves in campaigns.

Marketing experts estimate that the average American is exposed to between 4,000 and 10,000 ads per day, and this steady stream of content has an enormous impact on the way we see ourselves. Though we won’t be able to change the narrative overnight, we can all commit to listening to and learning from others and to doing better once we know better. For example, in 2016, Ryan Murphy announced his Half Initiative to ensure that at least 50% of directors on his shows were women, people of color, or LGBTQ+ individuals.

Marketers can think about how to make their companies (and campaigns) more inclusive. Set actionable goals that you can achieve in the coming months and years. Consider hiring diverse crews and agencies to ensure that campaigns are led and created by those reflected in them. No leader or company is perfect, and our experiences are not universal. But by taking the right steps with each new campaign, marketers can tell more inclusive stories and create campaigns that more accurately represent our world. And as we do so, one step at a time, we can build a world together that is truly equal.