One of the greatest honors of being a filmmaker is the ability to discover and tell people's stories.

For a brief moment in time, we get the opportunity to step into someone's world, live their life and then share their experiences with the world. From the second we first spoke to the team at John's Crazy Socks, we knew this was a story that needed to be told.

When we came across John’s Crazy Socks we knew this was a story we had to tell. We pitched it to Google as a small business story with a Father’s Day angle. We knew this was the perfect opportunity to tell the story of John Cronin and his father Mark. John's Crazy Socks is a father-son operation in the heart of Long Island, NY that sells socks online, but there’s much more to the business than meets the eye.

John is a 22 year old businessman who was born with Down’s Syndrome. When it came time for John to graduate high school, he was concerned with what he could do for work as an adult. The one thing that John was certain of in life was that he wanted to go into business with his dad. John had always loved socks. The wackier the better. They were somewhat of an obsession for him. So one day, John came to his dad with a business plan to form a sock company and John’s Crazy Socks was born. 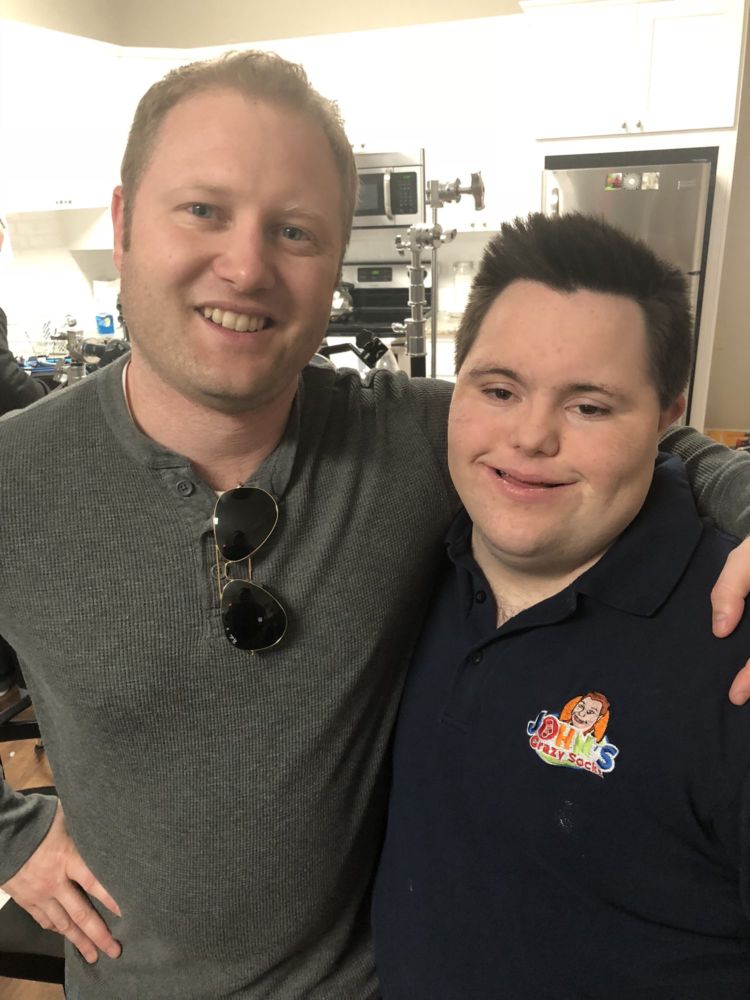 Mark will be the first person to tell you that his son's Down Syndrome has never held him back, but rather propelled him forward in life. There aren’t many people who have started their own business in their early 20's. Yet, John did. There aren't many people who have testified before Congress as they champion causes for those with disabilities. Yet John has. What makes John even more unique is his humility. In-between takes, we would look over to see John filling sock orders, writing personal notes to customers, and even taking out the trash. He is a businessman, through and through.

During the few days we spent at John's Crazy Socks, one thing became abundantly clear - this is a business that has heart. To see the bond between Mark and John was an incredible sight. Their bond goes beyond the traditional father/son connection. They’re also business partners in every sense. The most beautiful and unique aspect of their business is the heart and compassion they bring to the office everyday. They make each of their employees feel empowered and loved. They aren’t simply treated as employees, they’re also treated as friends and family. There were numerous occasions when we saw John lovingly checking in on his employees.

When it was time for everyone to go home after their shift, we saw a shift in John’s demeanor from joyful to concerned. By law, people with disabilities are only allowed to work for a portion of the day or risk losing their disability benefits. Most of John’s employees would gladly work a full day, but can't afford to lose the benefits. You can see how this rule wears on John. He wants to make sure his employees are taken care of. On numerous occasions, he has gone to Washington to testify to open up employment opportunities for those with disabilities. You can feel the passion he brings to this cause, and his employees notice it as well.

While John and Mark can talk all day about their mission, you really get to see it through their employees. While filming this story, there was one moment that all of us felt truly defined what John's Crazy Socks is all about. That moment came when we filmed an interview with one of John's employees, Matt Carvajal, a sock wrangler for the company. Being autistic, Matt had always had a hard time getting a job. He opened up about how many employers didn't want to hire him because of his autism. To see how that can take an emotional toll on someone is incredibly difficult. As Matt told his story, each one of us behind the camera began to choke up. However, for Matt, John's Crazy Socks was a blessing. Matt loves his job, he loves to work, and he loves to work at a place that understands that his disability isn't a disability at all. Through Matt’s story, we were able to vividly see the true impact that this business has. John's Crazy Socks isn't just any sock company, it's a place that loves and empowers people that may not be able to find that elsewhere. It provides a paycheck and financial independence to people who may have never had that before. It brings purpose to those who were seeking an identity. At the entrance to their business, John and Mark have a neon sign that boasts the phrase, “Spreading Happiness.” Hearing stories from employees like Matt really brings this phrase to life. They not only bring happiness to the customers that buy their fun socks, but also to their employees who are now able to work and create an identity for themselves.

We are so happy to share the story of John and Mark Cronin and we wish them and all fathers in the world, a very Happy Father's Day.